Screening this year (2017), the new documentary film ‘The Art of the Symphony’ presents Shostakovich Symphonies in relation to my artworks as a music painter. Filmed in Prague, our common affinity with the theme of ‘freedom from oppression’ is confronted with the history of the Czech people through Shostakovich’s Symphonies. Combined with images of former Communists sites in Prague and archive footage, the film culminates in the creation of three paintings evoking passages from Shostakovich’s Fourth Symphony, created “live” in my Prague studio in August 2016. Produced by the DSCH Journal affiliate DSCH Films, filmed & directed by Alan Mercer.

>Here is the text for the conference held at Centre Chostakovitch in Paris, 13 May 2017:

“Welcome to The Art of the Symphony, our pre-screening conference, exhibition and film at Centre Chostakovitch! I am delighted to be here and very much thank the Centre for their hospitality (Mr Emmanuel Utwiller) and providing the space for this afternoon’s event. First and foremost my gratitude is to Alan Mercer from the DSCH Journal, director of the documentary film we are now about to present. But above all, he is a dear friend and soul mate, with whom I shared many treasured moments of this project and whose poetic vision and amazing camerawork have become so very much part of this film.

I was more than greatly surprised when in the summer of last year, 2016, Alan Mercer approached me with the question if he may use some images of my paintings on Shostakovich Symphonies for a film.

Shortly after that we met in a Paris cafe and, right there, I became totally captured by the idea of making a film together. Our immediate understanding with the concept set the tone for all that followed; the shooting of live-painting at my Prague studio, visiting former communist sites, meeting in Amsterdam, in London, the multitude of exchanges, be it sweeping ideas or detailed descriptions – all these experiences became part of the artistic process. 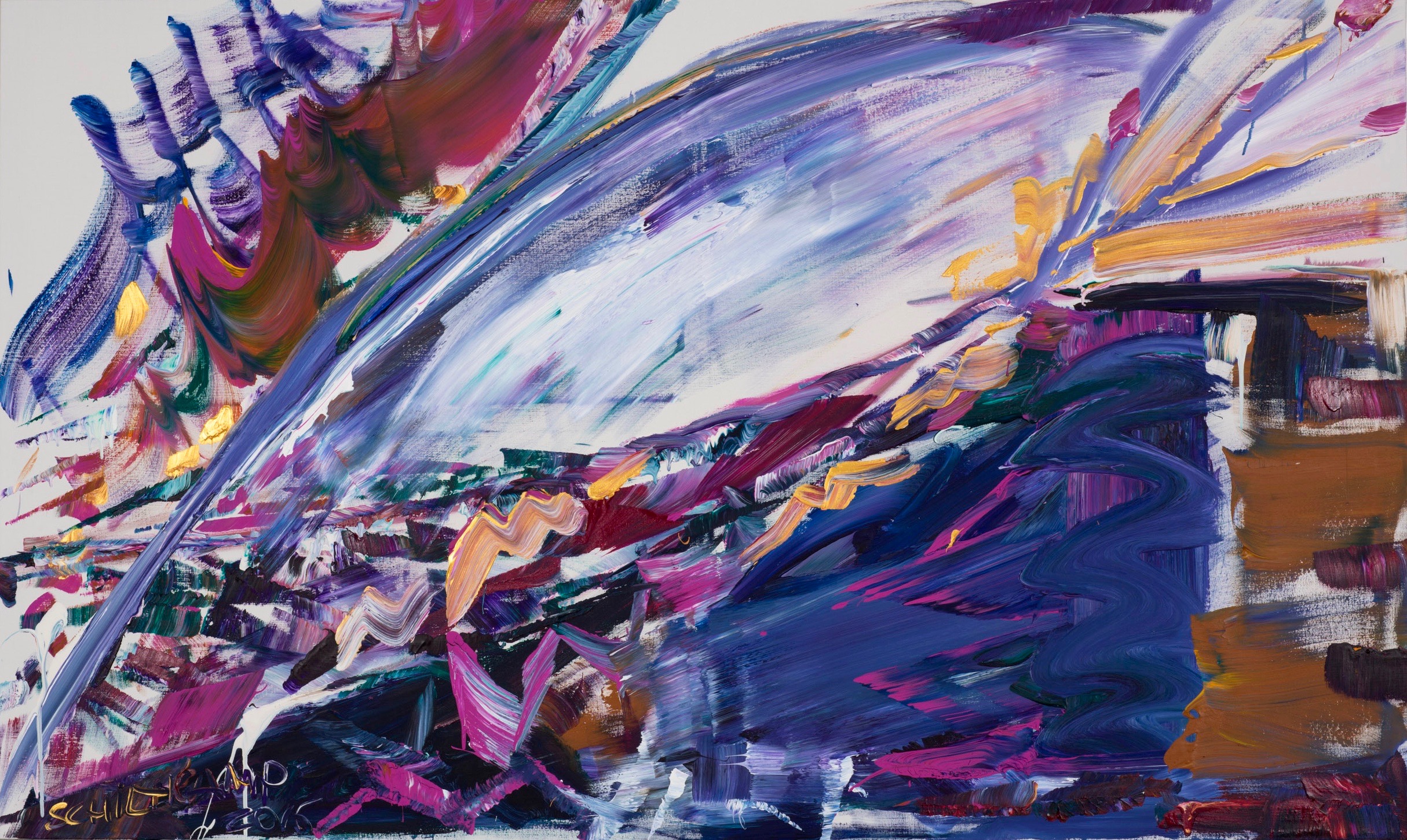 But there is also a relevance in terms of what we are facing today in the world – totalitarian regimes in North Korea, China, Turkey, Iraq and Vladimir Putin’s autocracy – reminds us of the times of the former Warsaw-pact. Also on a more existential level, as the need for human beings to express their lives freely.

One of the main themes in our film ‘The Art of the Symphony’, is our affinity with Shostakovich’s symphonies, and which might be described as ‘individual freedom versus totalitarian oppression’. But however political this context may be; it is the theme of humanity we aim to represent here; the suffering of the individual and the power of artistic creation to connect and rise above this agony.

Filmed in Prague, ‘The Art of the Symphony’ confronts us with the theme of freedom from oppression, just as we encounter in Shostakovich’s music, and relates to the history of the Czech people. Former Communist sites and archive footage in the film are combined with passages showing the various artistic processes in the studio. This heightens the sense of relevance even for today, through key moments of the artworks’ creation. I have great affinity with the Czech people, what they have been going through in history. It has been a state of continuous oppression. Not only the Habsburgs, but then the occupation by the Nazi’s, then the Soviet regime. They suffered betrayal from their Western allies in 1938 at the Munich conference, and later, in 1945, when the U.S. Army troops left and the Russians marched in as ‘liberators’. Many Czech families are affected by experiencing these times, of which they don’t wish to speak, closed as a national trauma.

In 1936, while Dmitri Shostakovich was composing his Fourth Symphony, the newspaper Pravda – on the direct orders of Joseph Stalin – published an editorial “Muddle Instead of Music”, that denounced the composer and his opera Lady Macbeth of Mtsensk. Despite this attack, Shostakovich completed the symphony and planned its premiere in Leningrad, but at some point during the rehearsals he withdrew the work. It was premiered only 25 years later, in 1961.
In hindsight, it might seem surprising that a performance of such an unconventional symphony was planned during Stalin’s Great Terror. The Fourth Symphony is the ”credo” of a fiercely independent and enlightened modernist – highly experimental, including elements and influences of Mahler and Stravinsky. Although he outwardly denounced this work, saying it was too grandiose, when it was finally performed in 1961, he didn’t change even one note of it, considering it the best he had ever written.

When studying Shostakovich’s music, the more you focus on it, the more cautious you need to be; interpretations and the purposes they serve, are ours, not necessarily Shostakovich’s.

During the time of the Great Terror and up to Stalin’s death in 1953 and even in later years, Shostakovich was able to forge his own musical language, speaking with stunning emotional power to the Russian people, in total empathy with their suffering, and the life-threatening pressure Shostakovich was under in his life never stopped him from composing.

When Alan Mercer asked me to work on Shostakovich’s Fourth Symphony as a live-painting, it was an enormous challenge for me. The Fourth Symphony is a vitally important work whose modernist elements led to the work being withdrawn. In my direct way of live-painting I wanted to connect with the sources that inspired Shostakovich’s search for freedom.

In the documentary film we will see three creations on canvas, painted “live” in the studio in Prague, evoking passages of Shostakovich’s Fourth Symphony; the one and half minute Fugato from the first movement, the second movement Moderato which is 8 minutes long, and the final thirteen minutes of the third movement Allegro through to the deeply moving end, the Coda.

This is my first symphonic live-painting. I had previously worked on two other Shostakovich Symphonies: the Largo from the Fifth Symphony painted in 2013 and the Tenth Symphony painted in 2016. But these are oil paintings and recollecting concerts I attended, with the  music resonating in my mind for weeks or months,. Whereas the live-paintings, are created “live” as I hear the music.

I am a music painter and I am fascinated by the visual parallels of musical movement and how colour relates to sound. I have a wish to paint music and this has become a new performance art – combining music and painting on canvas during a recital or concert.
This visual creation follows the musical movement and the colour of sound at the same time, producing a unique experience. 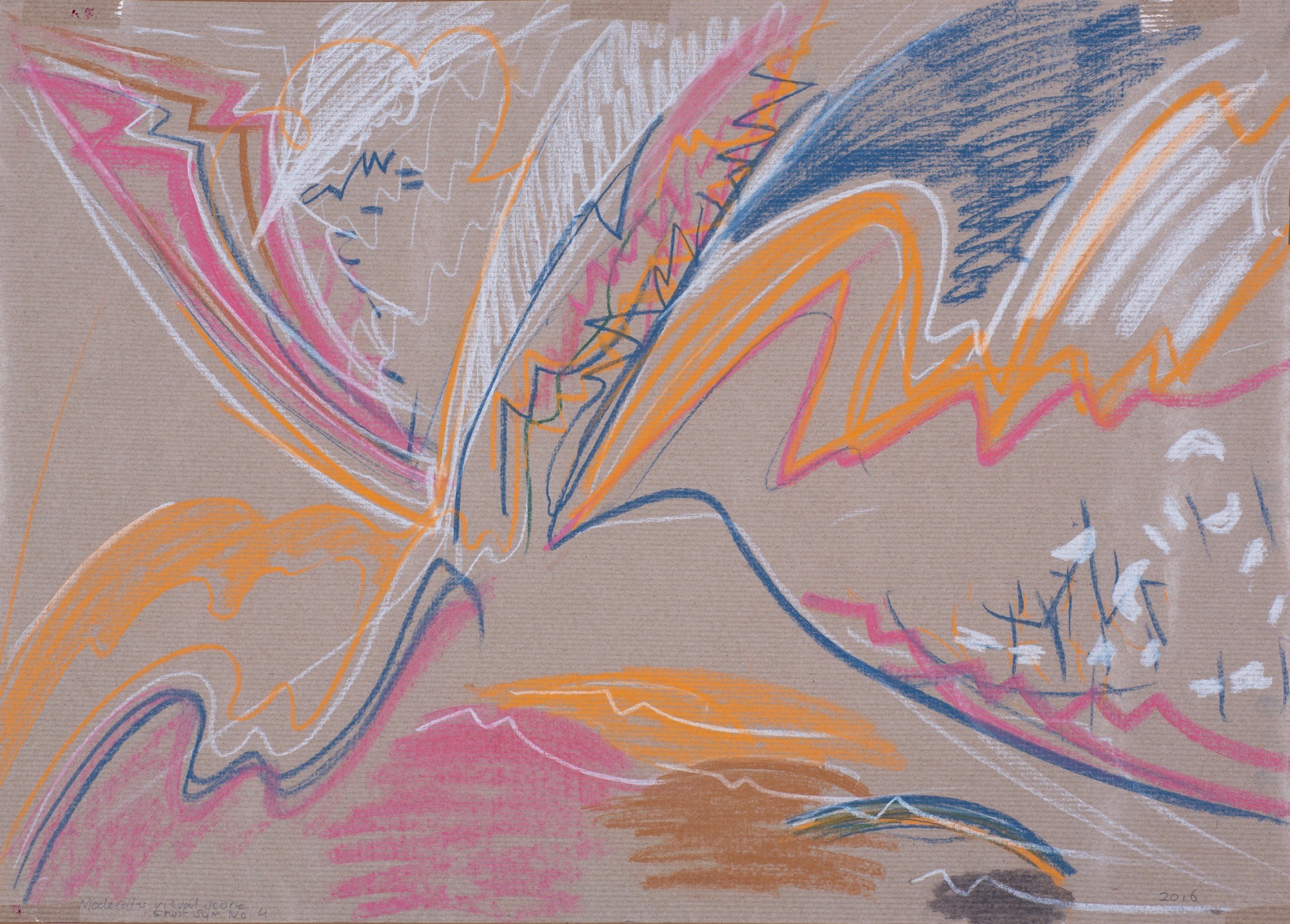 As part of my preparation, I study the musical score in detail, and a timeline following the music is created. From this timeline, a visual score is designed, which I now rehearse simultaneously with the music. As I practise, I decide when to paint what – and where – on the canvas; on might say ‘choreography for the movements of the brush’.

Significant moments in the dynamics of the music are highlighted: contrasts and syncopations, the work’s main themes and variations, and the overall nature of the piece.

For the live performance, these various preparations and studies are of course helpful but are not definite; it is not a fixed plan. All that happens during the performance itself is part of a moment, an instant, and as much as I aim to carry out a plan and to anticipate the gestures and movement, the final work always results from an experience based on musical and physical interactions, in what is a totally open form of art with a strong improvisational element. So the viewer can see the music develop in layers of colour before their eyes and, in this way, they are part of the total artwork.

We now invite you to experience the impact of Shostakovich Symphonies in live-painting and be part of ’The Art of the Symphony’!”