The Musical Painting ‘Shostakovich’s Symphony No.10’, created this year, is one of two paintings inspired by symphonies of Dmitri Shostakovich. My preceding painting, ‘Largo Shostakovich’ (2013) is a visual interpretation based on the Fifth Symphony, the Largo movement.

Both symphonies I heard in concert – a tremendous experience! – the impact of which I brought home to my studio, to immerse myself in studies and reflection. Then followed by a time, that I hear the music in my mind and I am somehow absorbed in the atmosphere and significance of the piece. The painting is not in a descriptive way related to the score, but my own, almost physical, response to the agonising energy it conveys.

As for Musical Paintings, and in particular my paintings on Shostakovich’s symphonies, I wish to say here that it is my intention also to value music as a state of mind, a striking human document of deeply moving content that has the ability to reach audiences, not only contemporaries of the composer, but new generations to come will recognise the theme of oppression and individual freedom. For me it matters in which time the music was composed and what were the circumstances of the composer. I see it as a witness of our humanity and cultural identity through the times.

Following the death of Joseph Stalin in March 1953, Shostakovich’s Symphony No.10 (Op.93) was premiered by the Leningrad Philharmonic Orchestra, with Yevgeny Mravinsky conducting, in December of that same year. Sketches for some of the material date from 1946, with most written in 1951 and the final form of the symphony completed between July and October 1953. The length of the Tenth Symphony is 50 minutes, which are 48 minutes of tragedy, despair, terror, and violence and 2 minutes of triumph. The most widely accepted interpretation of the work has seen it as a depiction of the Stalin years in Russia, with the second movement, the Scherzo, as being a musical portrait of Stalin.

Studying the interpretations of Shostakovich’s music, the more you focus on it, the more cautious you prefer to be; interpretations and the purposes they serve, are ours, not necessarily his. In quest of what it all means, perhaps it’s best to say: nothing in Shostakovich’s music can be taken at face value. It is a rough road of codes and quotes, sardonic irony and hollow triumph to keep the State at a distance. The only thing we can say with certainty is Shostakovich’s signature code, DSCH, a musical motif to represent himself. (A cryptogram read in the German musical notation De-Es-Ce-Ha for his name Dmitri SCHostakovich) 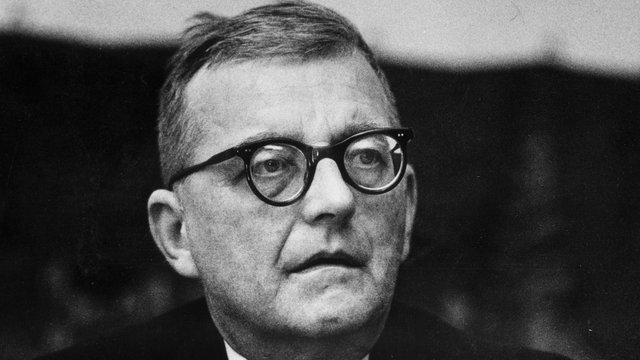 During the time of the Great Terror (1936), up to Stalin’s death in 1953 and in later years, Shostakovich has been able to forge a musical language, speaking with stunning emotional power to the Russian people, in a total empathy with their mass suffering; a devastating sound, but in a way of a catharsis. Shostakovich was walking a tightrope, with Stalin watching his every move. Friends and colleagues disappeared or were killed, family imprisoned. Individual lives were suffocated by suspicion, apartments bugged, colleagues and family reporting on each other. After the second denunciation of Shostakovich’s music by the Zhdanov decree in 1948, following his first in 1936,“ [Shostakovich] waited for his arrest at night out on the landing by the lift, so that at least his family wouldn’t be disturbed.” The life-threatening pressure he was under did not keep him from composing. Outwardly conforming to government policies, reading speeches and putting his name to articles he didn’t write, obligatory composing Cantata’s for Stalin like the ‘Song of the Forest’, for which he is, on one hand, severely criticised by those who see him as a coward, an obedient tool of the State, a devoted Soviet citizen; but even so admired on the other hand by others not doubting the inner scars and torment this inflicted on him and who recognise a hidden controversy, the voice of the rebel outwitting censorship, the music of a genius who used his restrictions to create a monumental human document, exactly because it was in the shape of the oppressing form, created by nothing else but his own artistic integrity. The authorities, indeed, grotesquely failed to see the irony and awarded Shostakovich with Stalin prizes, honours and privileges, all at mercy of Stalin’s whims. The musicologist Richard Tarushkin writes in his book On Russian Music (2009): “Yes, forgive the man, by all means. Who are we to judge his deeds? He faced pressures we cannot imagine, and nobody is required to be a hero. But do not list him among the heroes. Going along to be left alone is the response you and I might make to totalitarian pressure, not the response of a ‘moral beacon’.”

Scholars spend a lot of time verifying whether the Fifth Symphony is in fact a dissident statement, a public response to the attack on his music that began with the Pravda article “Muddle instead of Music” followed by his first denunciation in 1936. “ I’ll never believe that a man who understood nothing could feel the Fifth Symphony. Of course they understood, they understood what was happening around them and they understood what the Fifth was about.”, Shostakovich says in Testimony, Solomon Volkov’s controversial, but very influential book (1979) which claims to be ‘The Memoirs of Dmitri Shostakovich’. Others insist Shostakovich used his music as a kind of covert dissidence. Dissidence is public, and the term should be reserved for people who did take the risk, like Alexander Solzhenitsyn and Andrei Sakharov.

On the Pushkin Poems:

A composition based on a poem is likely to be taken explicit, and the textual content maybe used by de-coders to suggest hidden programs in some of the symphonies.
Several times, Shostakovich was inspired by the early 19th century poet and playwright, Alexander Pushkin, for his compositions. Four Romances on Poems by Pushkin (1937), a serious and highly personal work, is often seen as a key to the Fifth Symphony, which Shostakovich composed a few months later. The first song is a setting of Pushkin’s poem Bозрождение –‘Rebirth’ (1819) and contains thematic material that Shostakovich used in the Fifth Symphony’s 4th movement, the finale.

The first movement of the Tenth Symphony Shostakovich quotes from his earlier Four Monologues on Verses by Pushkin (1952) Что в имени тебе моем? – ‘What is My Name to You?’ (1830), the second song, reflecting on the theme of personal identity. Pushkin contemplates the posthumous oblivion of his name. Here Shostakovich builds in the musical code of his own initials – DSCH – in the piano part. In the Tenth Symphony, the DSCH motif is most prominent in the 3rd movement, and in the Finale when in an fortissimo outburst it hammers out the maniacal Allegro. The music builds to a massive climax , fortified by the DSCH motif as a resolute assertion of the individual’s triumph over a soulless regime.

In my painting Shostakovich’s Symphony No.10, the feather-like structure at the left side of the painting is related to another poem by Pushkin, not found in the symphony but emerging from the depths of my own interpretation; Пророк –‘The Prophet’ of 1826. In this poem, we gaze into a vision of horrifying revelation: The poet meets a Seraphim with six wings at a crossroad, a celestial encounter which leaves the poet violently shattered – the pupils of his eyes are grazed, his tongue is ripped out and replaced with the stinger of a wise serpent, his heart is cut out of his chest and a piece of burning coal with a flame is installed – images to express the spiritual costs of the poet’s lucid state. With “Arise, prophet, and see and understand. […] Scorch the hearts of the people with your tongue” – a warning for the audience – he is set on his way … to create.

I somehow wish to communicate that the force of creation has a destructive side which takes its toll on the poet, the artist, the musician. That the very nature of creative imagination is of the same source as its opposite; that seeking harmony and beauty is like walking alongside an abyss of chaos and dissonance. That the life-affirming creative side is reinforced by the presence of darker elements, by the real threat of annihilation and extinction. A dichotomy we inherited from the cosmos, as we are built from the same elements, although we can be more or less aware of it.

Confronted with Shostakovich’s compositions and, to me, in particular in the symphonies No.5 and No.10, the level of destruction being communicated versus the outburst of creative powers in response to that, is of a magnitude equal to opposing forces on a cosmic scale. We are drawn to beliefs and faiths that see our destiny as a light that will overcome darkness, our lives as the strivings of the soul to overcome forces of destruction.

I wanted to create an image in which the soul is not defeated, in which individual freedom is not crushed by the oppression of a de-humanising, totalitarian regime. Here, to my idea, the wings of the Seraphim represent the inspiration of the soul striving upward, although some of its feathers are burned. The feather-like structure is being pulled down by something bending and stretching to the right. The sharp metallic planes cutting the diagonal across the painting are about to snap, the inner strain is in a torsion, an overpowering strength on the edge of its collaps; it is a moment of triumph, albeit a more exhausted than jubilant one – a break for Shostakovich after Stalin’s death, followed by an uncertain thaw.

As a tribute to Shostakovich’s Symphony No.10, the painting is a visual expression of my affinity with the music. It started with the impact of a concert I heard, and what comes later is an unsettling road of interpretations. That is why I drew the image from a more archaic domain, which is behind the ethical question where to place Shostakovich.
In the end, Shostakovich remains free from our interpretations; he is present, precisely, in paradoxes and cryptograms. The magnificence of his music will continue to reveal what is beyond our direct comprehension.