[The Art of Survival: Russian Music in Shostakovich’s Century]

Book review published in the July 2020 edition of DSCH Journal, the music magazine dedicated to the life and work of Dmitri Shostakovich. 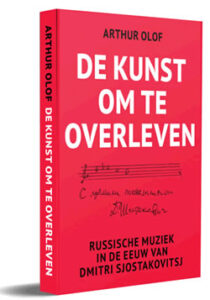 In ‘The Art of Survival’: Russian Music in Shostakovich’s Century, Dutch radio producer Arthur Olof (1954–2014) describes the history of music in twentieth-century Russia, a time when Soviet artists were forced to conform to the party line in their creative works, under the threat of persecution. The focus of the book is Dmitri Shostakovich, whose resourceful ability to compose in spite of these restrictions, was of great interest to the author as an example of the art of survival.

Olof explains how Shostakovich’s oeuvre was closely connected to the contemporary artistic and literary scene in Leningrad, and provides a wide-ranging, kaleidoscopic view of music history along with colourful details. These insights offer a deeper understanding of the context of Shostakovich’s work and sketch a broad cultural and sociopolitical framework as a background to his life. To Olof, Shostakovich’s music mirrored the political oppression and cultural life in 20th-century Russia.

The fulcrum of the book is the Dutch radio series Oorgetuige (‘Ear-witness’); almost 100 episodes produced for the Concertzender station between 2009 and 2014. Interspersed in the book’s text are QR-codes providing links to the Concertzender website, allowing access to the music under discussion. The book thus offers a unique sound library of around six hundred compositions by twentieth-century Russian composers: from Shostakovich to Ustvolskaya, from Prokofiev to Gubaidulina and from Stravinsky to Schnittke. In addition, there are links to visual art provided by access to the websites of museums such as the Hermitage, the Tretyakov Gallery and the Pushkin Museum.

While the wide-ranging scope of the book necessarily excludes in-depth analyses of chosen subjects, the provided links to on-line references undoubtedly enhance the book’s appeal. In addition, the author’s selection of artists, coupled with his insightful comments on them provide an original and fascinating panoramic view. But it is Olof’s ability to draw the reader into a realm which is so very Russian, where beauty could still save the world and a deep sense of the metaphysical is alluded to, that projects this book far beyond the mere musical history. To “set the tone” each broadcast began with a motto: “All in memory of you ….”, a line of poetry by Alexander Pushkin, which Anna Akhmatova used to accompany her Northern Elegies, a cycle of poems she wrote during one of the darkest times of her country and her personal life. Chosen in turn by Arthur Olof, these words convey how music can relate to the human soul, and the power of artistic creation to connect and transcend.

Arthur Olof was the son of the well-known violinist Theo Olof, a Jewish refugee from Germany. Arthur studied Slavic Languages and Dutch Literature in Amsterdam and was a producer for Concertzender.

The idea to publish a book based on the radio series took shape around 2012. A year later Olof was diagnosed with a fatal illness. Determined to complete the book, he handed the finished manuscript over to his wife, José ten Berge, six weeks before he died in 2014. She became the driving force behind the publication and book launch in June 2019.