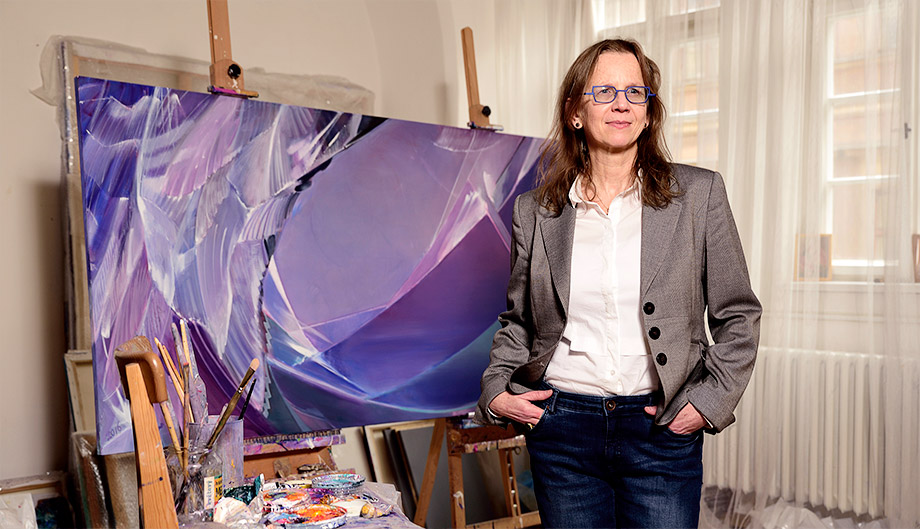 Maryleen Schiltkamp studied art at the Rietveld Akademie and the Rijksakademie voor Beeldende Kunsten in Amsterdam (Netherlands) and has exhibited in galleries and museums around the world, including in New York, Los Angeles, Tokyo, Curacao, Amsterdam, St.Petersburg and Prague. She also has performed at venues and festivals in London, Guildford, Bergen op Zoom, Amsterdam, Prague and Cesis (Latvia). Maryleen’s artworks on Shostakovich Symphonies have been the subject of a British documentary, The Art of the Symphony, which premiered in 2017 in Paris and Prague, in 2019 in The Hague and Amsterdam.

In recent years, Maryleen has been fascinated by the visual parallels of musical movement and colour relating to sound, through which various collaborations with musicians have developed. These include combining exhibitions with recitals; mixed-media projects for video-film  and recently live-painting during recitals, a new performance-art in which Maryleen collaborates with Reinis Zariņš in musicpaintingLIVE, with Tobias Borsboom in the project PAN on the tone poem Pan Op.43 by Czech composer Vítězslav Novák, and with Marcel Worms for J.S.Bachs Wohltemperierte Klavier (Book 1 & 2)